Gas Prices are Dropping – What Does it Mean? 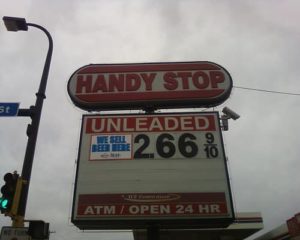 Gas prices are the lowest that they have been in nearly three years; with the economy–an more importantly, the people–still struggling to recover from the worst recession since the Great Depression, this serves as a sigh of relief of many cash strapped individuals out there. So what does it mean for the future? Not much, yet.

The recent drop in gas prices is mostly due to a series of recent economic downturns precipitated by the United States government shutdown and recent major natural disasters. These events have resulted in a huge drop in consumer confidence resulting in decreased demand. This, combines with the fact that there has been an uptick in global crude oil production that has resulted in the highest manufacturing levels since 1989.

Since large scale natural disasters and arbitrary government shutdowns are not becoming the norm (we hope), factors such as these are not expected to continue to play a role in dwindling oil prices, we will have to look elsewhere for a possible sustained of heartrendingly low prices at the pump. The factors that give us hope for the future in this regard are the value of the dollar and excessive supplies of oil due to continued overproduction..

The value of the dollar

An increase in the value of the American dollar always bodes well for gas prices in the United States; the American dollar is the benchmark for global oil prices, and when the dollar goes up, the less Americans have to pay for gas relative to other currencies. With Europe facing a more ambling recovery than the United States, this trend could continue.

Right now, despite the drop in consumer demand, there is an oil boom going on. As it was stated earlier, gas production is the highest that it has been 24 years. This boom in global production is easily outstripping demand and is expected to affect gas prices at least until the summer.

What does all of this mean for the auto industry?

Lower gas prices always bode well for the vehicle industry, because the more confidence people have in their ability to afford to keep gas in their tank, the more likely they re to invest in a new vehicle. Manufacturers of vehicles with mediocre fuel efficiency, such as pickup truck manufacturers can expect to see the biggest benefits, because those Americans who would love to own a new pickup truck, but are concerned about gas prices, will be more confident buying a pickup truck on the heels of dwindling gas prices.