Possible Redemption for the Nissan Titan in 2015 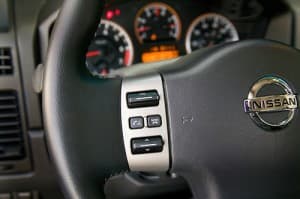 The Ford F-series has been the leader in full size pick up trucks for several decades, but Nissan is attempting to up the game with the 2015 Titan. The Titan has previously not sold very well since its 2003 debut, and barely sold over twenty thousand Titans in 2012.

The Titan previously only offered king and crew cab models, but it is rumored that the 2015 will offer a regular cab as well. With the new body style, a wider body and higher headlight placement are most likely to appear on the 2015, based on brief looks at the “mule” model that was tested this spring.
Previous power train options did not leave much to choose from. The king and crew cab models S, SV, and Pro-4X all come with a 5.6L V8. A V6 has been rumored, but the more likely change in power train may be a Cummins 2.8L diesel. Cummins and Nissan have worked together for years in the development of a light duty truck that would offer a diesel engine. Everyone wants to jump on the “go green” bandwagon, and this could be a good way for Nissan to do that. Estimated gas mileage for the 2013 S model Titan is 13 city and 18 highway.
Which is a ridiculously low amount, considering that the Ford F-150 Crew Cab model gets 17 city and 23 hwy. The Cummins engine has an estimated 40% better MPG than all previous V8 gas powered engines. That would be a substantial improvement, and excellent selling point, for Nissan.
Nissan wants to set themselves apart from the competition and are staying very quiet about this Titan. Currently there are only rumors and speculation and the occasional glimpse while Nissan tests this new Titan. Innovation will be the key for them to rise above the pack, or at least be able to run with the current pack. Unfortunately Nissan has yet to give its customers anything near the “wow” factor for ten years. Everyone likes to root for the underdog, and hopefully Nissan will give us plenty to cheer about in the spring of 2014 with the unveiling of their 2015 Titan.