What will be the next trend in auto-manufacturing? We are still long ways from flying cars, but what about all aluminum pickup trucks? In fact, that might well be the next big thing. With new federal regulations regarding fuel-efficiency, automotive manufacturers are looking for any way to reduce fuel usage and increase average miles-per-gallon. One of the ways in which various car companies are looking to achieve these new federally-mandated goals is by switching their main building material from steel to the lighter weight aluminum. 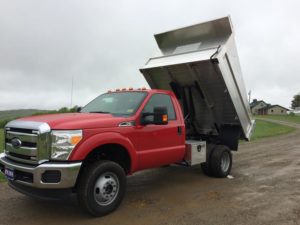 The current leader in this arena is Ford, which is releasing its 2015 model of flagship truck F-150 built of mostly aluminum. This will help improve the truck’s fuel-efficiency by reducing the truck’s weight by around seven-hundred pounds, or by about fifteen percent. This will allow to the truck to achieve a higher miles-per-gallon average than would be possible with a steel-based body. As a general rule, a ten-percent decrease in weight is equal to a seven-percent increase in fuel-efficiency. The aluminum body could also enable other fuel-saving renovations, including smaller engines. Achieving greater fuel-efficiency is an imperative for all auto-makers looking to do business in the US, thanks to the 2011 Federal regulations requiring an average MPG of 54.5 for all cars by 2025.

Ford’s experimentation with a mostly aluminum body could, depending on the success of its 2015 F-150, provide a glimpse of what pickup trucks may look like in 2025.In the 1990s, both Honda and Audi released cars with aluminum bodies. Before the 2015 F-150, however, the use of aluminum has been mostly the domain of luxury brands, such as Jaguar, Ferrari and Land Rover. With the introduction of Ford’s new truck, aluminum will be put to a more strenuous test. The production-scale of the F-150 dwarfs that of cars like the Jaguar XJ, and that scale will provide a true measure of aluminum’s durability and feasibility. There are some problems with an all aluminum truck. Aluminum is more expensive than steel, and more difficult to work with. But there is also optimism: Novelis Inc., the world’s largest manufacturer of rolled aluminum, has tripled its US production of automotive sheet aluminum.Should Ford’s experiment pay off, expect to see many companies follow its example, and don’t be surprised if by 2025, we will all be buying pickups made from aluminum.