Ram pickup trucks are manufactured by FCA US LLC, which it has marketed under the Ram Trucks brand since 2010. This brand includes the 1500, 2500 and 3500 series, such that the 1500 series is comprised of light-duty pickup trucks. The Ram Truck is currently in its fourth generation, which was introduced in the 2009 model year.

Ram 1500 pickups are offered in nine trim levels as of the beginning of the 2015 model year, and many dealer-installed packages of the Ram 1500 are also available. The Rebel is a trim level will be added to the Ram 1500 lineup in the third quarter of 2015. This version is primarily intended for off-road use.

The primary distinguishing features of the Ram 1500 Rebel deal with its suspension and rear-axle ratio. The Rebel has heavier Blistein shock absorbers and Ram air suspension, which raises the vehicle one inch higher than other trim levels of the 1500 series. All drive configurations of the Rebel have a rear-axle ratio of 3.92, which is the first time this ratio has been available on a Ram 4×4 pickup.

The most noticeable styling differences on the Ram 1500 Rebel are a new grille and 17-inch wheels with black pockets. This trim level also has cloth seats with black and red trim, and an embossed tread pattern. 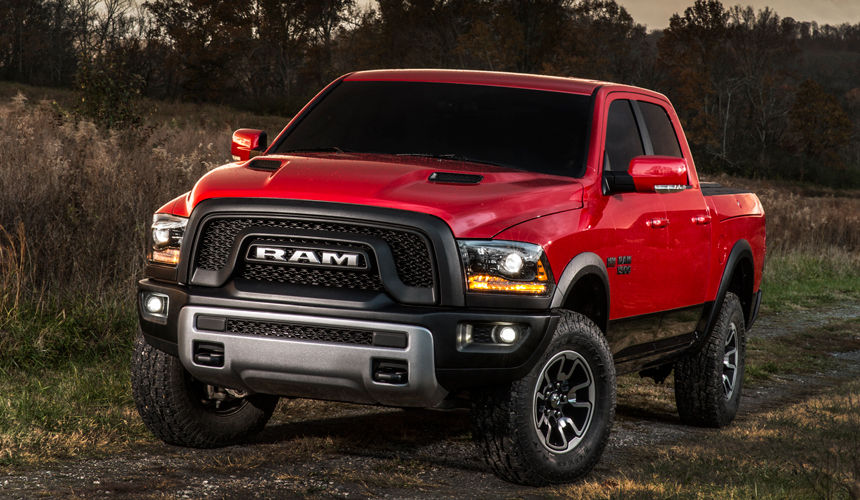 The mixed color schemes available for the 1500 consist of a primary color and a trim color as follows:

The 1500 Rebel is available with three cab styles, including a regular cab, quad cab and crew cab. A regular cab has two doors and one bench seat. A quad cab has four doors and two bench seats, although the rear seat has significantly less leg room than the front seat. A crew cab is similar to a quad cab, except that the leg room in the rear seat is equal to that in the front seat.