You’re a fly on a wall and you hear a brief conversation about some drivers taking the risk of trans-Antarctic travel driving to the South Pole. Well the Roald Amundsen team made it one hundred years ago in 57 days using mush dogs and sleighs over the Antarctic mountains, glaciers and tundra. The 21st-century polar team of explorers led by team leader Jason De Carteret, hope to slash the record he set back in 2005 at two days, 21 hours and 21 minutes – yikes! 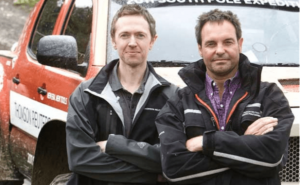 On December 14, the team hit the road driving a totally modified Toyota Tacoma midsize pickup. Empty of cargo, the Toyota would weigh two tons, carrying 200 plus gallons of fuel (bioethanol), the driving crew and necessary supplies. Looking to the future they plan to prove that wheeled vehicles are lighter, more agile and economical than ordinary tracked vehicles.

Winds in the Antarctic can blow for days on end. To capture that energy, the Polar Toyota Tacoma Truck will carry a small wind turbine on the roof alongside several solar panels. Since they’ll have 24 hour daylight the truck can almost support itself as well as provide power to emergency systems.

By adding 44-inch balloon tires and new three-piece rims, the Antarctic truck offers a perfect fit for this weather not asphalt. Plus adding ultra-low, snow-crawling gears in a revised transfer box, racing seats with harnesses and a supercharger, the team will get fast pickup. Yes folks, if you’re thinking this Polar truck may be like a fish out of water on the roads, yet when you are required to go off-road, well, lookout. And since they’ll be looking at a minimum of 3-foot-high snow drifts and driving in low-gear, the Toyota Tacoma truck had installed modified cooling radiators to reduce heat buildup in the engine.

12 inches of air-gap thermally insulated orange carpeting was often tiring for the team to look at.

This was the first motorized drive to the South Pole and the Toyota Tacoma performed admirably. That said, maybe Sir Edmund Hillary and Roald Amundsen were correct when they said: “No snow is too deep and no road too steep!” Even pulling two sleds of fuel to get to the Pole, it was worth it.