Indiana is a fairly friendly state toward those who enjoy off-roading. Whether it’s a modified truck, an ATV, or another sort of vehicle though there are certain laws that have to be obeyed while off-roading in Indiana. Off-roaders can’t just pick up and go somewhere, unless it’s an off-roading park like the popular Badlands Off Road Park or Haspin Acres.

Legally Operating an Off Road Vehicle in Indiana

Off road vehicles, or ORVs, may not be driven by someone under the age of 14 without supervision. These vehicles may not be operated on any road without a valid driver’s license, and they are to cross any obstacle such as a road, river, or stream at a 90 degree angle by the shortest possible path. If someone is operating an off road vehicle on private property then that person needs to have the permission of the property owner. 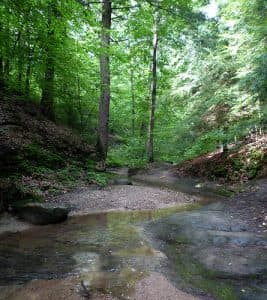 These are just a handful of the restrictions faced by those who want to enjoy off-roading while still obeying the law. In addition to these basic rules there are others that individuals need to pay close attention to. Some of these rules include the fact that any ORV operated after dark must have at least one functioning headlight and one functioning tail light, that an individual may not operated an ORV with a bow that has an arrow nocked and that firearms transported in an ORV must be unloaded and trigger locked.

These are just some of the more common, bigger rules for those who want to operate ORVs in Indiana. It’s entirely possible that cities and counties will each have their own restrictions and rules for users to follow, and there may be differences in a given locale. On top of that a property owner or off-road park can set whatever rules for users to follow that don’t contradict the law. So it might be necessary for individuals to only go a certain speed, to wear helmets and goggles, or even to drive in pairs. If someone doesn’t follow the rules on private property then the property owner can request that individual leave and don’t come back.

That’s why it’s always important to follow the rules, but more importantly one should always know just what those rules are before getting behind the wheel and laying plans for a long day of off-roading all over Indiana.