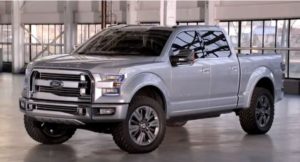 Ford Motor Company made a splash at this year’s North American International Auto Show by releasing their new concept truck design. The truck they are calling Atlas drew quite a crowd and it is easy to see why. The modern design builds off of their already flashy look of 2013 and what they have done with the Raptor. The intention of this concept is to show the world that Ford is not trying to follow but lead the way in the half ton truck market.

The Ford Atlas Concept showed off some of its tricks at the auto show which include hide away running boards, built in cargo ramps, a ladder rack that drops into the tailgate, a front grill that vents air depending on the conditions and safety features like warning signals for tired drivers.

Along with tie down anchors that at least appear to be functional the Ford Atlas has a ladder rack that rises out of the tailgate. The surface of the cab roof is made to use with this rack so you can stow a ladder, kayak or canoe up there without hurting the truck. No more placing a towel down and hoping for the best.

The Atlas also has cargo ramps that allow you to load your ATV built right into the truck bed that easily slide out when you want to use them and stow away unseen when you’re done.

The front grill allows more air to enter the engine bay when it is hot and closes up slightly when you are cruising down the highway. This saves on gas by making the truck more aerodynamic when it can help it and saves on engine wear by keeping it cool when it needs it.

The running boards move up and down which is not a new thing to vehicles but is new for a truck in this class. As is the safety features that mimic a Volvo or Mercedes. Combine class with toughness with style and you have the Atlas concept truck.

Other technological features include a wi-fi hot spot, voice to text capability, led lights on the bed and plugin outlets around the bed for tools or whatever else you need. 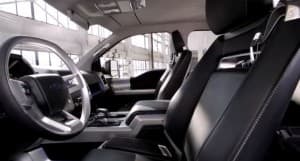 True to Its Roots

Although there are no specs available for this concept yet we do know that the model would have a next generation EcoBoost engine and a six speed transmission designed to tow. Ford says that fuel economy would also be an important factor in the Atlas concept but we suspect there will be plenty of power under the hood.

The interior of the concept looks amazing and is no less impressive than the exterior. It looks like the interior design was born from the Raptor with a slightly more futuristic look.

Ford’s new Atlas concept that was unveiled at the 2013 North American International Auto Show was mind blowing for any truck fan. No matter what manufacturer you are loyal to you can’t deny that this baby gets you a little excited!