The Ford F-Series of pickup trucks has been in continuous production since 1948. The F-150 is a full-size pickup that’s the most popular variant in this series. This variant was introduced in 1975 to circumvent new admission requirements that were to be introduced the following year.

The Ford F-150 was originally marketed as a heavier version of the F-100, which was also known as a half-ton pickup. This label originally indicated the vehicle’s payload, although the first generation of the F-150 had a payload of 2,275 pounds when properly configured. The term “half ton” now refers to a pickup truck’s general classification, rather than its actual payload.

The XL trim level of the F-150 has a minimal interior that includes an AM/FM stereo and vinyl floor coverings, although the amenities and furnishings become more luxurious as you go up the trim levels. 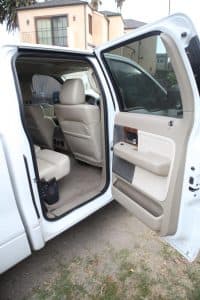 The interior of the top trim levels have a classy look that you would expect in an upscale sedan. It’s also ergonomically designed so that controls are located where you expect them. These interior features reflect the overall trend towards using a truck more for transporting passengers than material.

The Ford F series is currently in its 13th generation as of the 2015 model year. This series makes greater use of aluminum in the body structure to reduce weight, with some configurations losing up to 750 pounds compared to the previous year. The firewall is now the only major sheet-metal component not made of aluminum. The F-150 has a body-on-frame construction that is 77 percent high-strength steel, as compared to 23 percent for the previous year’s models.

In addition to the changes in construction materials, Ford also introduced a number of features to assist with driving for the 2015 model year. These features include adaptive cruise control, a blind-spot warning, collision warning, cross-traffic alert and lane-keeping system.

The F-150 is available in a range of body styles, bed lengths and trim levels. The body styles include a regular cab, extended cab and crew cab, although Ford markets the extended cab as a Supercab and the crew cab as a Supercrew. The crew cab may have two or four doors. The bed lengths available for the F-150 include 5.5, 6.5 and 8.0 feet. It also has five trim levels in the following ascending order:

Standard equipment on the F-150 includes air conditioning, 17-inch wheels and cloth upholstery. It also has a front bench seat with a 40/20/40 split and rear seats with a 60/40 split for the crew cabs and extended cabs. Additional standard features include a 6-speaker sound system and a 4.2-inch display with six speakers for the crew cab models and four speakers for all other models.