Automakers to get in line with the MPG standards

In 2012, President Obama set out the new mpg standards for all automakers to double the fuel efficiency of new cars, and trucks by 2025. This amounts to an average vehicle running at 54 miles per gallon. The gradual expectation includes that by 2016, a vehicles miles per gallon realizes an overall improvement to 35 miles per gallon per the Corporate Average Fuel Economy program. By doing so, the expectation is the United States will lower its oil consumption by 12 billion barrels. Other benefits include the lowering of gas emissions, and the potential to generate many jobs due to projected demand increase for the new technologies, that will be required in building the more fuel efficient vehicles.

It is important to note, that every automaker is to meet this fuel efficient standard based upon the average fuel economy of its entire product line. Meaning automakers that manufacture a great deal of trucks such as Ford, Chevrolet and Dodge, will have to make up for the lower miles per gallon trucks by producing more fuel efficient vehicles in their remaining product line. Ultimately, automakers will have the option to reduce the weight of their vehicles, stop using V8 engines, and to make certain the design of their vehicle is more aerodynamic, including body styles that are more rounded. 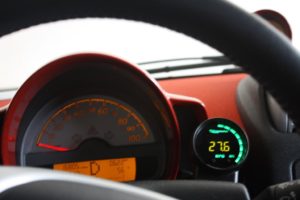 Heavy duty trucks equate to approximately four percent of the vehicles registered in the United States, yet burn through 25 percent of the fuel used. Each automaker will need to work at producing more gas-electric hybrids, and plug-in hybrids that run on natural gas or hydrogen. Those manufacturing trucks will need to look into multiple speed transmissions. For instance, upon stopping at a signal, the truck turns off to save gasoline, and the engine turns back on again upon pressing down on the accelerator.

Most are predicting that the increased technology invested in the more fuel efficient vehicles will increase the price of the vehicle by $1,800 to $2,200 by 2025, yet the life of the vehicle, if properly maintained, will reach 200,000 miles versus just 100 – 125,000 miles that most get out of their vehicle today. In line with other government standards, there exists the potential of the 54 miles per gallon mandate getting altered, especially if the big three automakers are struggling to meet the expectation. Ultimately, one will find that consumers taste will drive whether or not the more efficient fuel vehicles succeed.